On the piano, you are only able to sound one note at a time. The organ is vastly different. By playing one note, I can play upwards of 3-6 notes at the same time, depending on the stops and couplings.

As mentioned before, the organ pipes are divided into two categories: flues and reeds. The flues are divided into a few sound descriptions. First, the principal voices, which are not imitating anything orchestral and very warm, vibrant, and well-developed. Secondly, the flute voices, which are somewhat of an imitation of flutes, and can be milder or brighter, depending on the stop. Thirdly, the string voices, which typically imitate a string orchestra and are brighter harmonically. Lastly, there is a mixture of all three tonal descriptions. The second division is the reed pipes. Again, these pipes have a metal tongue that vibrates against an open, flattened side of a metal tube called a shallot, while flues produce sound through the passing of wind through the edge of the mouth of the pipe.

So how am I able to play one key but produce so many tones? Well, in the pipe organ you have a number or symbol on each individual pipe stop. This number or symbol indicates to the organist the type of pipe, and length of pipe. On our own organ, my favorite stops are typically the softer, sweeter stops known as the Viola Celeste I 8.

Let’s break that down. The Viola Celeste I indicates the type of pipe to the organist, and the number indicates the length. This is a softer flue flute sound that is 8 feet in length. If you look at the pipe organ, you notice that these numbers are typically even by 2 feet, 4 feet, 8 feet, 16 feet, and 32 feet, all doubling the length of the pipe to raise or lower the tone an octave. So, a 4 foot stop and an 8 foot stop are an octave apart on the keyboard, meaning they are 8 notes apart. By the way, we do have pipes in our church that are physically 16 feet, down to physically 2 feet and smaller.

On the organ, you will also see a 15 2 stop. What does this mean? This means that at a 4 foot stop, a 15th or a double octave will also sound with that one note that has been pressed. What this does is add a regal and bright texture to the organ. For lack of better words, it has a bright tone to the pipes' overall sound.

We have talked about the mixtures, but let’s talk quickly about the pedals or the bass notes. Our organ packs a rumble. I have a 32 foot stop that I rarely bring out because it shakes things up! We do not have a 32 foot pipe organ present (that is where the speakers rumble) but we do have a 16 foot pipe, which gives us a nice rumble, as well. 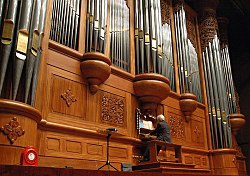 Fun fact — the longest organ pipe is in the Atlantic City Convention Center. It is the 64 foot stop, which is literally 64 feet tall. (Some organs have 32 foot stops with a 10 ½ foot stop, with a sound equaling the same tone.)

The pedal stops do not contain mixtures, but they can be coupled downward if desired. Well, I hope that this helps deepen your appreciation for our organ.

Salem’s organist has written a series of articles about the organ for Staff Trax this year. This is part 6 of 7.